In order for great beauty to rise from ashes, a gem [someone or something precious] first must burn. In other words, restoration and reformation will happen after a person has been through difficulty or apparent calamity.

The familiar story of a woman who eagerly waited to know the purpose of her life and to be lifted up from the ashes of this world comes to my mind.

Her story may not be unique, many can relate to her pain. As this woman sought to fulfill her purpose, the ride of life took her through layers and layers of adversity and distraction.  At times, she felt as though she was walking through the remains of a fire — a fire caused by misguided early life-choices. The haze from the embers made her wonder if she herself was a particle of ashy dust.

In spite of the tug-of-war that she felt within her, she had come to realize that she must muster the courage to stop bowing to others wishes and stop listening to the lies, and instead let the Spirit of righteousness dust off the ashes of her painful journey.

While she was hoping for a power to lift her out of the land of pain, heaven was calling her. She knew in her heart that God was telling her, “Get up, it’s time to move and rise.” She fearfully pondered whether to stay in the land of pain or allow God to raise her up and take her to a place unknown to her but known by Him, according to His mysterious plan.

Although the smoke around her was dimming her sight, she was still aware of the hope of the Invisible World [Heaven]. The Word of God says, whoever will draw near to God, He will draw near to them. Trusting His Word, and with the help of the Holy Spirit, she started moving toward God. As she did, He began to reveal His mystery to her.

She could hear that the “Deep” was calling to the depth of her soul, encouraging her to keep walking. She kept her focus on the Light that was beaming through the dusty air. Suddenly, something stirred within her, giving her strength. Instead of walking, she started running to the Light. As she did, the wall of embers started crashing down. The world around her began to witness God’s miraculous work in her life. She was being transformed from the inside out. She was no longer walking in the valley of ashes, but rather walking under the shadow of the Lord’s beauty. 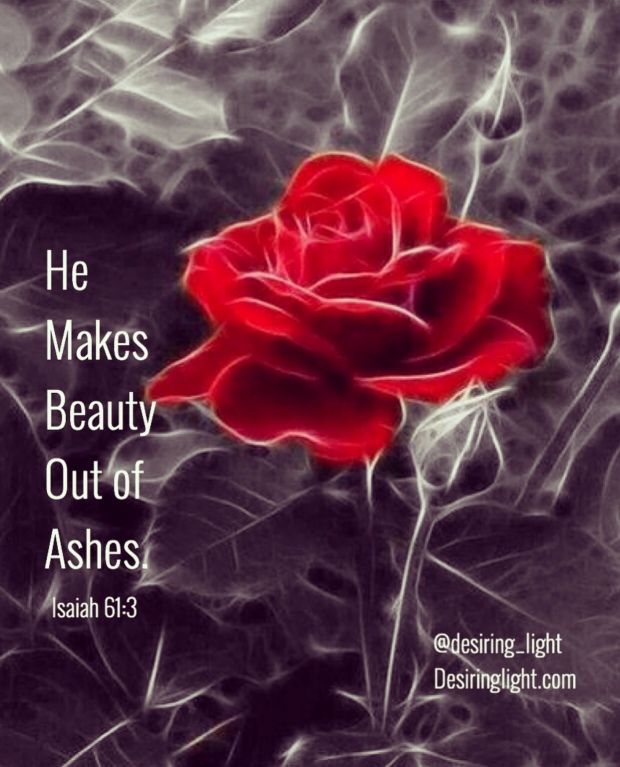 Christian blog, a personal testimony of how God can inspire and change Lives.